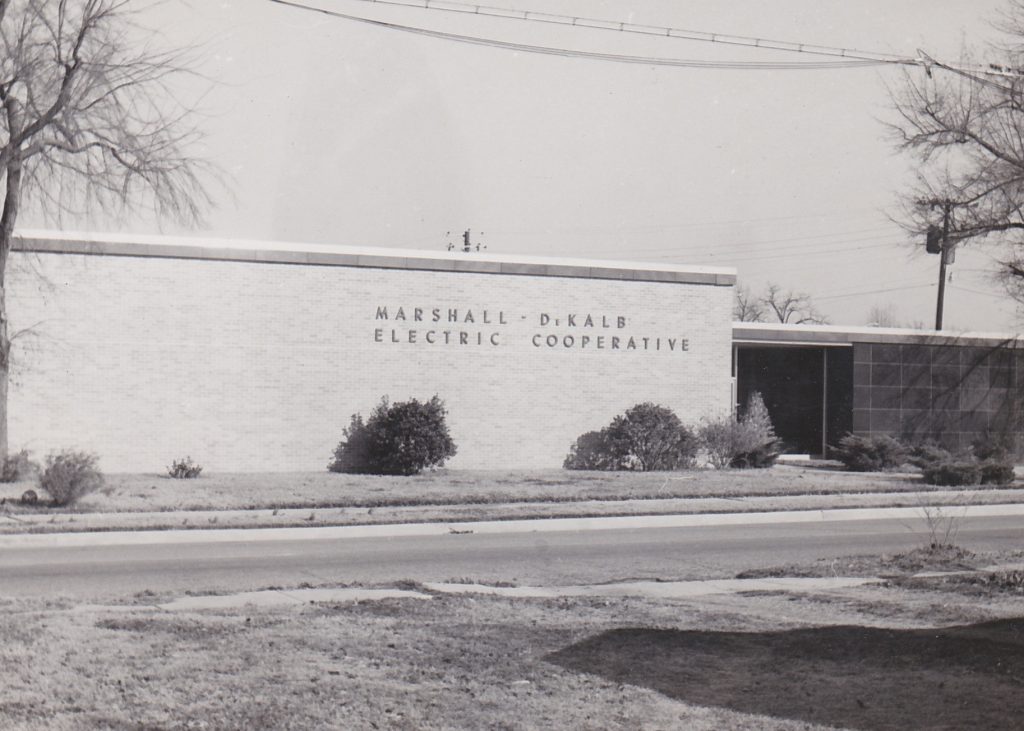 Prior to World War II, electrical service was virtually unheard of in rural homes in the Sand Mountain area. Alabama Power Company served the towns, and few families outside those towns enjoyed the convenience of electrical [power, except for those who lived along the main roads and were connected to the feeder lines that went from one town to another. An exception was a few thickly populated settlements out in the rural areas, to which the Power Company had run some lines. This was the situation that led to the birth of Marshall-DeKalb EC. The Tennessee Valley Authority had been created several years before, and was offering low-cost electric power to local areas where the people elected to form non-profit organizations to build electrical systems and supply this power to consumers. A group of far-sighted citizens saw the need for such a system to serve Boaz and the surrounding rural areas. And so, Marshall-DeKalb EC was organized with a board of trustees formed with leaders from Boaz and surrounding areas to be served. Bylaws for the cooperative were adopted September 29, 1941 at the first meeting of the board. Arrangements were made to purchase from Alabama Power Company all their facilities in the area that Marshall-DeKalb EC now serves, at a cost of $273,000. This included less than 200 miles of lines largely in towns and feeder lines in between. An initial loan of $408,595.63 was obtained from REA to finance the purchase of the system and begin some needed improvements. The co-op was officially organized February 28, 1942 with the first power contract with TVA dated February 6, 1942. When operations began on February 28, 1942, the co-op had 1,600 consumer-members along its 200 miles of line. Today Marshall-DeKalb EC has over 18,000 consumer-members along more that 1,200 miles of line in Marshall, DeKalb and Etowah Counties. Little construction work was done during World War II, with co-op leaders struggling just to keep the system operative with the shortage of manpower and materials during the war years. Area coverage was begun after the war ended, and a vigorous building program from 1946 through 1952 extended the lines to every family and business in the co-op’s service area. This was made possible by additional REA loans with the co-op borrowing a total of $1,060,847.67 from REA, including the initial loan. From the start, Marshall-DeKalb EC leaders set a goal of making the cooperative debt-free just as rapidly as possible. Just as Marshall-DeKalb EC achieved this goal in 1960, Sand Mountain was devastated by a destructive ice storm, which broke over 1,100 poles and several hundred miles of lines, costing the co-op over half a million dollars. This forced the co-op leaders to borrow funds for rebuilding the system. But by 1963 all of these borrowed funds had been repaid and the debt was retired. Marshall-DeKalb EC has continued to stay essentially debt-free since 1963 by good management and efficient operations – a feat accomplished by few electric cooperatives in the country. This is one factor that enables Marshall-DeKalb EC to have one of the lowest electric rates of any co-op in the state. Marshall-DeKalb EC has had many wonderful hardworking employees over the years that have also contributed greatly to the success of the co-op. We look forward to continuing to help power the future of the residents of Sand Mountain.